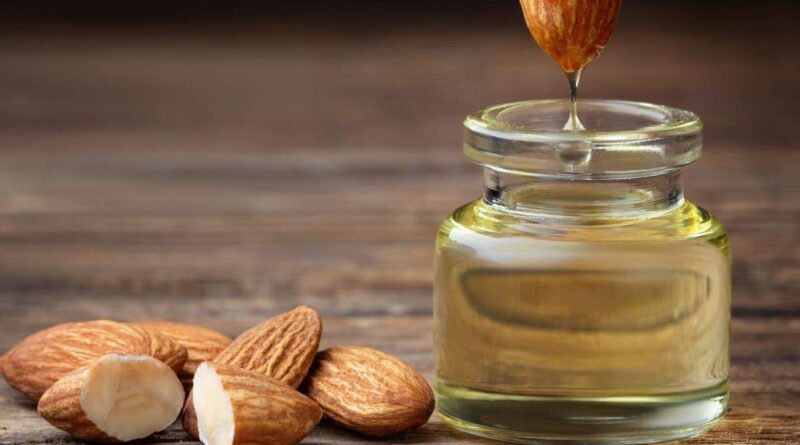 Almond Oil is extracted from almonds ‘badaam’, which are the seeds of the Prunus dulcis tree, a tree which is believed to be first domesticated in the present day Iran around the early Bronze Age era (3000–2000 BC). In India, badam was introduced in India during the 16th century by Persian travellers. Almonds and its oil have traditionally been considered beneficial for health in India, especially for improving brain health in general and memory in particular. For this reason, almonds are eaten in raw, roasted or fried form and the almond oil is used in cooking and for applying on body.

Generally, there are two types of almond oils classified on the basis of their taste…

The naturally bitter almonds produce bitter almond oil due to presence of amygdalin – natural cyanide, a known poison. Amygdalin is naturally produced in almond kernel. This bitter oil generally finds application in medicine, alternative traditional medicine and pharmaceutical industry and is not meant to be ingested.

Almond oils are also classified as refined or virgin oils, depending on whether these are processed or not.

Virgin Almond Oil is extracted using the mechanical cold-press technology which helps it retain most of its nutrients. No chemical is added to the oil for refining purposes. However, it has low smoke point, therefore, it is not suitable for high temperature cooking.

This makes it good for using as salad dressing or low-temperature cooking tasks, such as baking where almond flavour is required.

Refined almond oil is obtained after it is processed with chemicals. This is not nutritious to same extent and does not taste all that good as virgin oil but is more stable at high temperature. Therefore, it is used in such applications which do not require strong almond flavour such as frying and sautéing.

Almonds are a rich source of oil. Oil is extracted from the dry kernel of almonds. Almost half of kernel dry mass is composed of fat. Almond oil is composed of mainly of fatty acids and Vitamin E. It also has Vitamin B1, A, B6, B2 and Vitamin D.

As can be seen, the unsaturated fatty acids comprise about 90% of total fatty acids. These are considered good for heart as these do not contribute to accumulation of cholesterol in arteries and regulates blood sugar levels.

Vitamin E has properties of antioxidants which fights free radicals and prevents oxidative damage to cells, thereby preventing a number of diseases. This is why it has anti-inflammatory and immunity boosting properties.

Benefits of almond oil are associated with its consumption or application. Presence of vitamin E, vitamin A, unsaturated fatty acids, proteins, potassium and zinc are responsible for its health benefits.

1. Almond oil is suitable for almost all types of oils. People have been massaging their body with almond oil due to the belief in it being good for the health of skin. Unrefined sweet almond oil is one of the best oils for applying to skin. It protects skin from sun damage and prevents stretch marks and redness.

2. Fatty acids present in it help in retaining moisture. Vitamin E prevents dryness of skin. Zinc present in oil makes skin smooth. Due to these properties, almond oil has been used to treat eczema and psoriasis.

3. Skin cleansing, particularly facial skin cleaning, can be done by using almond oil. It helps us get rid of impurities by opening pores of skin, removes dead skin and excess sebum.

4. It can be used for treating acne scars, reducing puffiness and under-eye circles because of its anti-inflammatory and antioxidant properties.

5. Almond oil is good for reducing acne since it is rich in retinoid which are derived from Vitamin A.

6. It also has anti-aging properties. It allows collagen, the protein which is responsible for youthful look of skin, to thrive because of presence of Vitamin E.

1. Almond oil is good for hair. Almond oil has calcium, magnesium and zinc. Growth of hair depends on these nutrients. Presence of Zinc prevents thinning of hair.

2. The hydrating and nourishing properties of Almond oil make it good for applying on hair to get smooth, soft and shiny hair. It is applied to scalp and massaged gently, which not only nourishes the scalp and hair but also improves blood circulation to the scalp. This works to prevent inflammation in scalp and occurrence of dandruff.

3. Being rich in Vitamin E and antioxidants helps in offsetting the effects of problems created by free radicals and in preventing damage to hair by pollution, heat etc.

Almond oil also helpful in reducing the weight. Due to more unsaturated fatty acids, this is healthy alternative to many other oils which are high in saturated fats.

Unsaturated fats provide energy, build cell walls and helps to absorb vitamins A, D, E and K. Therefore, it is not necessary for obese people to stop using all oils in diet. Rather, it is far more useful to move to those oils which have high unsaturated fatty acids. This will help burn belly fat.

Again predominant unsaturated fatty acid composition helps people fight diabetes. In a research study, people having almond oil in breakfast had lower blood sugar after meal and maintained it throughout the day. People who consumed almond oil felt fuller and there was less craving for more food. This means that it improved the insulin resistance of the body.

Contraindications or Side Effects of using Almond Oil

There are certain side effects of almond oil on certain people due to which it shall be consumed or applied with precautions.

1/4. People who are allergic to nuts, shall not use almond oil.

2/4. People with eczema might also increase allergy if almond oil does not suit them. Therefore, it is always recommended to try it on a small patch of skin for some days before using it regularly on full body.

3/4. Those who are taking medications already, particularly for lowering the cholesterol levels, shall consult medical professionals before using almond oil in any way.

4/4. Certain people might be allergic to almond oil consumption and this would be indicated if they develop hives, swelling of sinuses, diarrhoea, abdominal pain, vomiting etc. In such situation, it is suggested that doctor shall be seen immediately.

While using almond oil in cooking, it is important to ascertain whether it is virgin oil or refined oil.

In case of Virgin oil, it is recommended to use it in only those cooking activities, which do not require working at high temperature because the smoke point of virgin almond oil is very low.

Also, being the most nutritious type of almond oil, Almond virgin oil is generally used for salad dressing and in cooking where low temperature is required, such as baking.

However, the refined almond oil is processed with has high smoking point which makes it good for high temperature cooking applications, such as deep frying.

Almonds are first dried in order to reduce the moisture content of the. This drying can be done under the sun for 2-3 days and also by hot air ventilation process. After drying, cracking of almonds is done and the seed is obtained.

The seed can be bitter or sweet. Oil is extracted from both types of almonds. Generally, the cold-press mechanical method of extraction is used by which most of the nutrient value of oil is retained. This is Virgin Almond Oil which has not yet gone through the process of refinement.

What is Almond Oil adulterated with?

Adulteration can be done to both the sweet and the bitter almond oils. Sweet Almond oil is generally adulterated with oils derived from peaches, apricots and cherries. Fatty acid composition of peach oil is similar to almond oils whereas that of apricot oil is totally different.

Methods of detection of adulteration

There is no home based mechanism to check adulteration of almond oil with other oils. So, laboratory tests are the only reliable means to find out adulteration.

Bitter almond oil has natural benzaldehyde which is quite valued for industrial application. But, due to very less availability, there is a tendency to use synthetic benzaldehyde as adulterant.