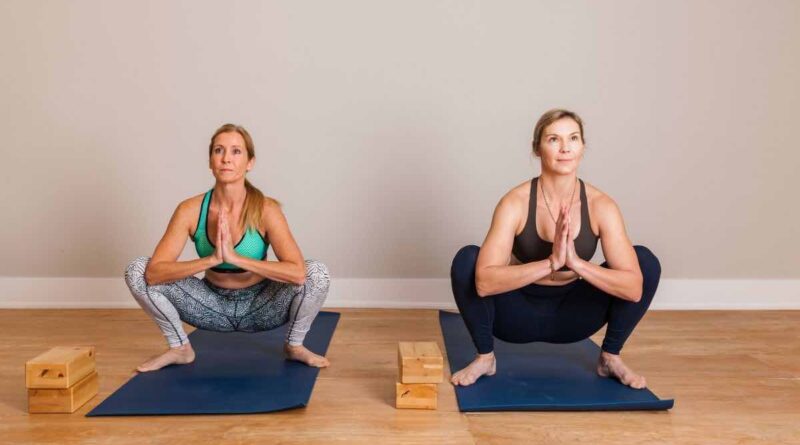 Squat Pose is somewhat like Malasana ‘Garland’ Pose, which is the Sanskrit name of a similar asana. Squat is a sitting pose in which a person simply sits down with folded knees but the hips do not touch the ground. By doing so, the muscles of legs are stretched and the Sacral and Root Chakras are activated. This pose has a bearing on the Water and Earth elements of the body. The Pitta and Kapha doshas of the body are also regulated and balanced. This yoga asana strengthens the muscles of hips, knees and ankles. It directly affects the meridians of Liver, Kidney and Urinary Bladder.

Precautions to be taken before undertaking the practice of the asana…

1/2. People with problems of knees are requested to avoid doing this pose.

2/2. If the hips muscles are tights, then these might torque the knees while bending. Therefore, some muscle movement should be done for the hips.

How to get Into the Squat Pose?

This posture is one of the easiest to get into…

2/2. Squat down with the arms in front in prayer position coming from around the knees.

Variations of this asana can be done by keeping more or less distance between the legs. Malasana is one variant of this pose.

Coming out of the Pose

1/2. One is to simply sit down on the hip bones and straighten the legs.

2/2. The other is to get up straight with the lower back bent and being in the Dangling pose. Then, you straighten the back as well. Coming out of the pose in this way might give you vertigo. Therefore, some support might have to be taken.

Benefits of the Squat Pose

The asana is good for a number of reasons. Some of the prominent advantages of this pose are given below…

1/5. Good for opening the hips and strengthening the ankles as whole weight of the body is balance on ankles.

2/5. Release the lower back as the weight is taken by thighs and feet.

3/5. It develops muscular strength in joints of knees, ankles, feet, hips and pelvis.

4/5. This is also a good pose for easing out any bowel and intestinal restrictions.

5/5. It stimulates the internal organs due to squeezing of the pelvic and abdominal muscles. So, all functions of the body, including digestive, excretory and reproductive systems function properly.

Options and Alternatives to the Squat Pose

1/5. Your heels have to be on the floor and you have to relax. If the heels are off the floor, then you should make the feet wider apart.

2/5. Knee and feet shall point in the same direction.

3/5. If the feet are wider than hip-width apart, then this pose works more deeply in hips.

4/5. If feet are closer to one another, then it works into ankles deeply.

5/5. Arms can be clasped by bringing these around the knees or from within the knees.

1/2. One such pose is Vajrasana in which the ankles are to be placed on the floor with their outward arch touching the floor.

2/2. Dangling pose is another variant in which the knees and the back are released and relaxed.