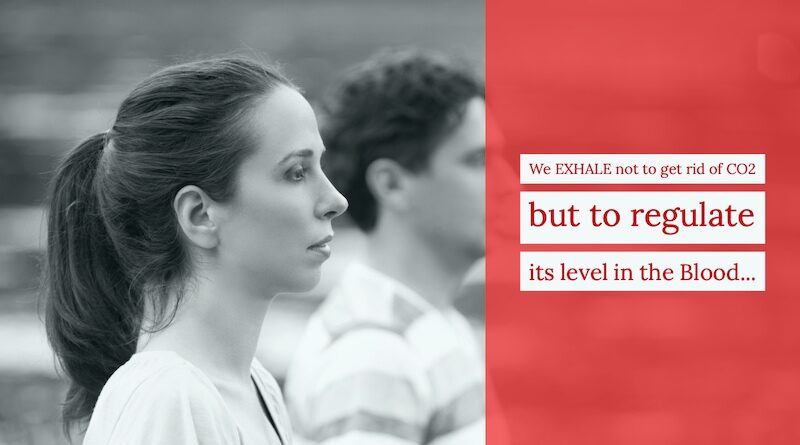 Optimal level of Carbon Dioxide in the lungs and arterial blood (40 mmHg or 5.3% at sea level) provides innumerable Health Benefits for the Body.

Most of us have been brainwashed into thinking that Oxygen is a good gas and Carbon Dioxide is bad and that is why we exhale it. Read on…

1. Under normal circumstances its Carbon Dioxide (CO2) that controls our breathing and not oxygen.

3. CO2 in the form of medical gas (1% to 10%) has been used for patients with asthma for therapeutic effects.

4. Studies suggest that CO2 levels higher than 5 % are used for treating patients with asphyxiation and to stimulate breathing in prematurely born infants.

5. Furthermore, breathing into a paper bag (wherein a person is asked to re-breathe his own exhaled carbon dioxide) is often recommended for patients with panic attacks.

We exhale not to get rid of CO2 but to regulate its level in the blood.

Breathing is a complex mechanism

Breathing involves both voluntary as well as involuntary control. Neurological control of breathing originates primarily from the respiratory centers located in brainstem. These centers regulate breathing rate and volume on the basis of CO2 levels in the blood.

However, our limbic ’emotions’ system, speech areas of brain and frontal cortex can also influence rate and depth of the breathing. These areas of brain can interfere with healthy breathing pattern, resulting in deregulated breathing, hyperventilation, thoracic breathing, rapid and shallow breathing, reverse breathing and breath holding.

What happens in deregulated breathing?

When the CO2 levels rise to a certain point, it stimulates our body’s chemical receptors (chemoreceptor). Chemoreceptor send signal to the respiratory center in the brainstem which trigger the breathing cycle.

Over breathing or hyperventilation is the most serious form of breathing deregulation. Over-breathing for a longer period of time can desensitize the chemo-receptors. Desensitization can reset the chemoreceptor to trigger breathing cycle at lower concentration of CO2, which can further increase respiratory rate.

The level our chemoreceptors should be triggered to breathe is about 40 mm Hg of arterial CO2. In an asthmatic it gets triggered only at 33 mm Hg of CO2.

Hyperventilation is caused by increased alveolar ventilation (exhalation of CO2) relative to metabolic carbon dioxide production, which results in hypocapnia (reduced CO2 levels in the blood). It is one of the most insidious and dangerous response to various stressors in daily lives.

Deficit in CO2 levels can immediately trigger or exacerbate system wide symptoms that involve physical and mental consequences of all kinds.

CO2 is important for ventilation perfusion matching. Hypocapnia (reduced CO2 levels in the blood) can worsen this matching and gas exchange in the lungs. It can therefore trigger

Reduction of co2 levels to 20- 25 mmHg decreases CBF by 40 to 50% as a result of one minute of over breathing. This is mainly mediated by vasoconstriction of brain blood vessels.

Vasoconstriction not only reduces oxygen availability (hypoxia) but also reduces glucose levels (hypoglycemia). This can exacerbate deficits in cognitive, perceptual and motor functioning.

Tissue hypoxia along with hypoglycemia can affect our attention, concentration, imagination, performance and ability to perform complex tasks.

Long-term vasoconstriction can result in reduced neurotransmitter synthesis and predisposes an individual to depression and other psychological problems.

Deficit in CO2 leads to reduction of carbonic acid and elevation of blood ph above 7.4 leading to respiratory alkalosis. Paradoxically, it can reduce oxygen availability (hypoxia) to the cells as haemoglobin doesn’t release its oxygen readily in alkaline pH.

Alkalosis can increase migration of calcium ions from muscle tissues and increases likelihood of muscle spasms, fatigue and soreness. It can also lead to platelet aggregation and increases risk of blood clotting.

Increased PCO2 and reduced pH cause a release of nitric oxide, a potent vasodilator, which results in increased blood vessel diameter, more blood flow and thus more oxygen delivery to the cells.

Whereas, hypocapnia (reduced CO2 levels in the blood) by constricting blood vessels can reduce perfusion to all vital organs.

Hypocapnia can affect magnesium-calcium ratio critical for healthy muscle functioning, which can lead to muscle spasms, pain, fatigue and soreness.

Hyperventilation can reduce blood flow to the heart by about 50% – a significant reduction in already diseased patients.

Increased platelet aggregation as a result of hypocapnia can increase chances of blood clotting (thrombosis).

Hypocapnia (reduced CO2 levels in the blood) can also precipitate cardiac arrhythmias and other cardiovascular abnormalities.

The elevated pH brings on calcium migration into muscle tissue, increasing the likelihood of arterial spasm.

As stated by The New England Journal of Medicine 2002 article over breathing in pregnant women is a common practice, and during childbirth, “…further lowering of the partial pressure of arterial CO2 – even for a short duration – such as during anaesthesia for cesarean section – may have serious adverse effects on the fetus.”

Over breathing while we are awake is strongly implicated as an important variable in the onset of sleep apnea. “Hypocapnia is a common finding in patients with sleep apnea and may be pathogenic,” according to the same article published in New England Journal of Medicine.

The above mentioned effects of Hypocapnia (reduced CO2 levels in the blood) take place in over breathers. However, the degree of the symptoms depends on genetic predisposition, lifestyle and environmental factors.

Many “experts” advocate the practice of inhalation, hold and then exhalation. This is not a good practice as it teaches the “habit” of breath holding. Holding the breath leads to a fast exhalation than required and causes CO2 deficit.

Instead, learn to breathe in a Diaphragmatic Sine Wave Breathing Pattern. That involves inhalation as needed followed by immediate and as slow as possible exhalation (longer than the inhalation, while in training). This encourages a regular, healthy practice of breathing properly.

We can literally create miracles in medicine simply by adjusting the rate and depth of a person’s breath.

A word of caution: Do not use social media videos to learn more on the topic. This is just an indicative article. Please consult a related expert to know more on this topic OR for your requirement.