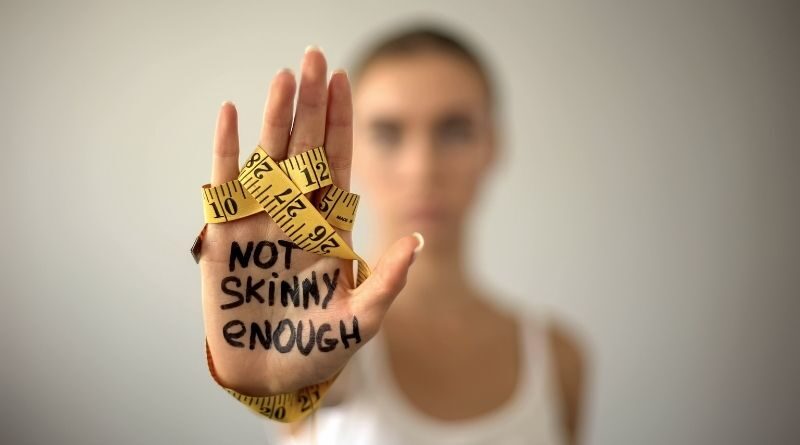 Unfortunately, our society is obsessed with the concern for looking pretty and body beautiful. So much so is this concern that lot of people find it hard to accept a lover who does not fit the typical physical norms of having a slim body.

Being fit has morphed into being slim, with no regard for what the obsession can do to health. Along with this… tv, social media, the fashion world, the “influencers”, “the Instagram feeds”, “yoga practitioners” and “fitness enthusiasts” put an extra burden to become slimmer to skinny, whether ones health permits it or not.

“People generally associate a thinner body with a younger age”… Some call it an evolutionary fitness benchmark, whatever it is, this understanding has to change, keeping pace with the changing times. Fashion magazines have to take a leap to rewrite this ‘slimness’ perception. Fortunately, we are moving in the right direction albeit slowly.

Are women more obsessed with being skinny?

More than 80% of the women I have spoken with don’t have the clarity between being fit, slim and/or size ‘-‘ thin. They want to be ‘slim’, even if means they skips their meals or over exercise. Sadly, the expression being ‘fit’, ‘slim’ and ‘thin’ are used interchangeably.

In addition to this, I have also observed this tendency among women especially, to indulge in rounds of judging and the like because they feel that an external appearance is key. The irony here lies in the fact that when women are judged by others in regards to their body shape and size, they react negatively.

However, latest studies have shown how women themselves have an inclination towards judging themselves negatively when faced with figure concerns. In addition, you need to know that women who have accepted that they are happy with their shape or size also undergo stress about how perfect they look.

Slimness has become an obsession…

Latest studies involving brain activity and responses towards the images of perfect bodies reveal that when a group of ‘fit’ women where shown pictures of flat abbed women and models with picture perfect bodies, their brain shows a sudden hike in activity. This reveals that women who are supposedly secure with their bodies also go through the emotional trauma of being stressed when seeing somebody with a flawless body.

This makes them no different than bulimic women who tend to have a similar roller coaster of emotions. What is more is that these studies reveal that women might finally be analysed as to when they could need counselling.

Experts can actually identify when women with eating disorders could be hit back with a relapse. This is almost like an unconscious trait that you have a quality that you yourself are not aware of.

In addition to this, you have to remember that men seemed more content with themselves, although they too are jumping on this being slim bandwagon. When men were shown pictures of other men on the beach in a bikini–flabby or thin–their brains did not show any emotional trigger of sudden activity. This actually helps us realise that men are more satiated with their appearances.

When the images of obese women popped up, the main activity was seen in the  medial prefrontal cortex of women, according to scientists who engaged into the study that saw publication in personality and individual differences. Even imagining how she could be overweight ended up making a woman trigger a sense of unease and  a sense of questioning about their own looks.

“Women are actually engaging in an evaluation of who they are and whether they are worthwhile as a person,” Tim Allen lead scientist of the study says. “Even though women might claim to be well adjusted and not care about body issues, subconsciously they might care.”

Based on these latest results, it finally appears that women with eating disorders and those without eating disorders have only a very thin line separating their brain triggers and emotions. Their brains might not be ditto same but what the scientists have concluded is that the reactions are similar. You can analyse if a woman is bulimic since her  reactions in the medial prefrontal cortexes would be very strong and this would be clubbed with strong activity in the region of the brain that sees negative emotions.

“With technologies for brain-scanning  becoming more affordable and  accessible, by the day, these results will finally give doctors ways to figure out the type of treatment and counselling plan for women with eating disorder”… Greg Siegle, Neuroscientist at  University of Pittsburgh School of Medicine says,

“Something is happening for women with regard to shape and weight, and that’s for real. This study is showing it at a biological level. It’s not just a myth.”

1.0% to 4.2%  women have gone through from anorexia
4% of all anorexic individuals end up dying from complications

Surprisingly only  6 per cent end up obtaining treatment

2.8 per cent of American adults could struggle with this disorder during a lifetime. About 43 per cent of people suffering from Binge Eating Disorder will end up obtaining treatment.

Eating disorders are a huge thing in the present. More than 10 million women and 1 million men in the US, undergo the same. Studies reveal that 50% of women struggle with weight perception, and 9 per cent of women might struggle in a battle with anorexia over a lifetime while about 1.5 per cent women could struggle with bulimia.

According to research and data by the National Association of Anorexia Nervosa and Associated Disorders in USA, it is revealed that close to 95 per cent eating disorders in women occur among those with ages 12 to 25.5 years.

For instance, according to the National Eating Disorders Association, those woman who look for help after being afflicted with bulimia from 5 years of onset of the symptoms, come with about 80 percent chance for recovery. However, in case the symptoms persist over a period of 15 years plus without any treatment, the probable chance recovery falls to about 20 per cent only. Yet, there is hope…

“The fad of appearing slim and how society is obsessed with it”… Hope society moves away from the set parameters of slimness. In fact, ‘Fit’ is the only word, I feel, should be allowed to be used for ones physical wellbeing.