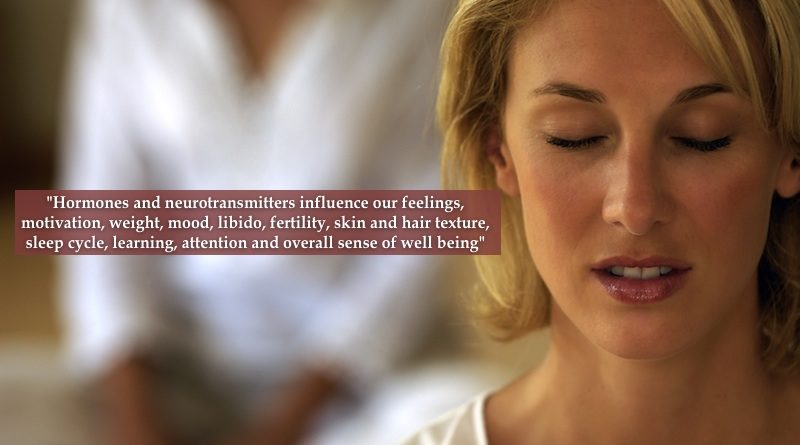 Yoga practice has a direct impact on ones Hormonal Health. Yoga Helps!

Yoga Helps! By choosing certain yoga technique, as well as poses that specifically target certain glands, we can bring the hormonal system back into balance. Regular practice of yoga has been reported to improve the cardiovascular profile and oxygenation of all endocrine glands. The massage of various glands and increased venous return as a result of compression and release during yoga can address hormonal imbalances.

Does this sound too good to be true? If so, read on!

Of our approximately 86 billion brain neurons, most are influenced by serotonin either directly or indirectly. Commonly known as the “happy” neurotransmitter, serotonin is mainly found in brain, intestines and blood platelets.

Serotonin helps controls Mood. This crucial chemical has a profound impact on our mood and social behavior, appetite and digestion, sexual desire and function, sleep, temperature regulation and contributes greatly to our overall state of well-being.

According to Princeton neuroscientist Barry Jacobs, PhD, lower levels of serotonin can affect our mood in a way that leads to depression. “Depression sets in when fewer and fewer new brain cells are created-a process that is mediated by serotonin, with stress and age being the leading trigger”.

Yoga and Meditation helps the body release serotonin naturally. Yoga asana can directly increase the firing rates of serotonin neurons, resulting in increased production and release of serotonin. In addition, there is an increase in the levels of tryptophan (precursor of serotonin) after yoga.

Scientists at the University of Montreal have shown that activities like Mindfulness Meditation have a direct impact on the brain’s production of serotonin levels. It does so by reducing grey matter density of amygdala and the right prefrontal cortex: brain regions responsible for initiating stress response. Meditation also increases activity in the happiness producing regions of the brain: the left prefrontal cortex. Read More… Serotonin; the happiness hormone

Chronic stress by activating the hypothalamic–pituitary–adrenal (HPA) axis in the brain, leads to secretion of corticotrophic releasing hormone (CRH) from the hypothalamus.

CRH stimulates the pituitary gland in the brain to produce adrenocorticotropic hormone (ACTH), which in turn facilitates the release of cortisol from the adrenal glands.

Yoga practice inhibits the posterior area of hypothamamus (the sympathetic area), leading to reduced production of ACTH from pituitary gland and cortisol from adrenals.

Often called by researchers as the “longevity hormone” and stress counter-puncher, DHEA is the precursor for male (testosterone) and female (estrogen) Sex hormones. DHEA levels decreases with age, opening us up to disease and accelerated aging.

Scientists believe that measuring DHEA levels to find a patient’s physiological “true age” is a far more accurate health marker than the “biological age.” In fact, a 12 year study comprising of 240 men with age group 50-79 years concluded that DHEA levels were directly linked to mortality. The researchers’ suggest that the less DHEA a person is having, the fewer years he may have.

Luckily, yoga and meditation provides a dramatic boost in DHEA hormone levels. A recent study published in evidence based complementary and alternative medicine found a 50% increase in the DHEAS levels in women who participated in a 12-week yoga program comprises of yoga asana (poses/postures), pranayama and meditation.

Best known as body’s anti-anxiety neuro-chemical, GABA (gamma aminobutyric acid) is one of the major inhibitory neurotransmitters present in your brain.

Deficiency of this chemical can create an array of problems, including anxiety, nervousness, phobias, restlessness, and insomnia.

In 2010, researchers at Boston university school of medicine found that a 12 week yoga intervention was linked with greater improvement in mood and anxiety and increased levels of GABA than a metabolically matched walking exercise.

Explicable for the “feel good effect” and sense of happiness we sometimes feel, endorphins are a category of neurotransmitters that act as body’s internal painkillers.

Endorphins are known to cause euphoria, produce feeling of pleasure, reduce stress, increase relaxation and are highly effective in pain modulation and management.

Research has shown that yoga practitioners have increased endorphin levels post practice, a state known as yoga high. This happy, Zen-like, state of bliss can be a highly pleasurable experience and explains why so many yogis are addicted to yoga and meditation.

During yoga practice endorphins are released into the circulation from a brain region known as the pituitary gland. Once produced, Endorphins bind to specialized receptors located throughout the nervous system. Upon activation, these receptors block the transmission of pain sensation traveling to the brain and inhibit the release of chemicals responsible for inflammation and swelling.

Often called as an anti-aging hormone, GH stimulates both physical and mental growth, cellular reproduction and regeneration during childhood. In 40s, your pituitary gland gradually decreases the amount of GH it produces.

The body’s diminishing supply of growth hormone is responsible for the frailty that comes with aging—weaker bones and muscles, slower metabolism, deposition of body fat, weak heart contractions, mood irregularities, lack of motivation, and fatigue.

Asana are a type of moderate aerobic exercise and studies have proved that moderate form of exercise can increase basal levels of GH in humans.

Kriyas or cleaning processes (Agnisara, Uddiyan Jalaneti, Sutraneti, and Vamandhauti) bring in control over the autonomic nervous system function by sending positive feedback to the hypothalamus-pituitary axis, and in turn influence GH production.

Suryanamaskar with its ability to stimulate pituitary gland and sending positive neuro-endocrine feedback can maintain a healthy secretion of GH.

A reduced sympathetic and stress response produced by meditation is the possible reason for the improvement in GH after meditation practice.

Since birth our circadian rhythm has been dictated by Earth’s natural cycles of light and darkness. In recent decades, in an effort to utilize 24 hours per day, modern man in this super-productive society, is experimenting with ever shorter nights and longer days.

This unbalancing, combined with our newfound love of screen staring, is taking a heavy toll on melatonin production. Melatonin production is at peak levels at night while we sleep. Melatonin is a hormone produced by the pineal gland and is known to prevent cancer, strengthen the immune system, reduces stress, slow down aging, and has been associated with preventing over 100 different diseases.

Researchers at Rutgers University discovered that melatonin levels for meditation practitioners were boosted by an average of 98%. Incorporating meditation into your life can be your much needed physiological re-balancing tool.

Oxytocin is that magical hormone that is produced when we first fall in love. It plays a role in sexual reproduction, sexual arousal and is released by hypothalamus when you have an orgasm.

Presence of oxytocin is important during and after childbirth, for bonding with the baby and milk production. It plays a role in development of pro-social behavior like trust, cooperation and social interaction.

In a study from India’s National Institute of Mental Health and Neurosciences, adding yoga for a month to schizophrenic patients improved social-occupational functioning by increasing oxytocin levels.

One of the mechanism by which yoga therapy can increase oxytocin synthesis is through stimulating Vagus Nerve. Stimulation of vagus nerve deactivates limbic areas which in turn could modulate the neural circuits involved in emotional processing.

Commonly known to control brain’s reward and pleasure centers, dopamine is a neurotransmitter that helps to regulate movement and emotions. Insufficient dopamine production results in Parkinson’s disease or addiction. Any kind of rewards increases dopamine level in the brain.

A clinical research from the J. F. K. Institute in Denmark published in Cognitive Brain Research found that Yoga Nidra- a guided meditation that produces deep relaxation- increases level of dopamine in the brain by 65 % on an average.

Thyroid hormones Triiodothyronine (T3) and Thyroxine (T4) are produced by thyroid gland. These hormones regulate the rate of metabolism, nervous system functioning, oxygen utilization and are responsible for physical and mental growth.

A 2011 study published in the journal Complementary therapies in clinical practice has shown that one hour yoga sessions performed daily for a period of one month helped women suffering from hypothyroidism in managing their disease related symptoms. Read on… Yoga for thyroid problems